Hopefully everyone has had some time with family and friends and enjoying the end of 2015 and getting some good rest and relaxation!!

2015 has been a pretty big year and 2016 looks like being even bigger as the momentum to keep Western Australia nuclear free continues to grow.

We are looking at having a planning meeting in Fremantle early February and hope many of you can come to contribute ideas and time for some of the big plans for 2016.

If you are feeling a bit generous time of year and wondering who you could give a gift too then your old friend the Bardi Bus would like to start the year with a few new tyres and a service.. To give the Bardi Bus a new years gift you can make a tax deductible donation 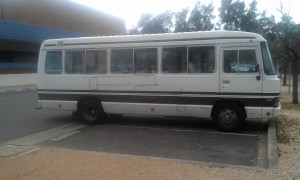 Any support is greatly appreciated

Massive thanks to everyone who took part in the Yeelirrie online submissions to the EPA – there were over 3000 people who took action! We hand delivered the signatures and a 75 page submission to the EPA.

The Toro Energy Wiluna extension proposal is also open for public comment. We will be working hard to develop online actions for both of these proposals and complete a bigger more in depth submission. Your support means so much and these procedural interventions are worth the time.

If anyone has time over summer to help read, digest and respond to these PER documents please contact Mia Pepper at CCWA

Massive thanks to everyone who has supported the Walkatjurra Walkabout over the years along with the online campaigns, actions, fundraisers and numerous events.

The continued pressure on industry and government is giving us a real chance to keep W.A nuclear free while also supporting local Aboriginal communities and building a global community embracing diversity, respect for land, culture and a nuclear free future.